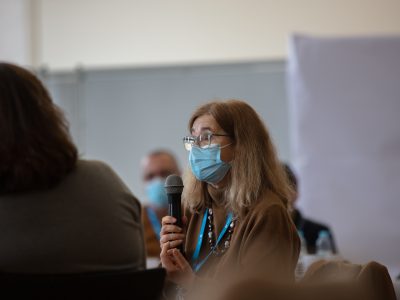 The ORBITAL ITN continued its training after the Year 2 Meeting in Santiago with an intensive two-day training at beneficiary, Instituto Técnico Lisboa, in Portugal.

“The ESRs have engaged heavily in the science of their work over the past week, training in the lab, learning about ocular modelling, and attending scientific keynotes, while discussing and sharing their ideas with each other. But a key focus for ORBITAL has always been how these researchers engage in the softer skills of scientific research – how we can better learn from people living with conditions that impact on vision, and how we can better share preclinical research to the people it impacts the most” Project Coordinator Laurence Fitzhenry stated leading up to the training at IST.

In his opening keynote, Professor Valente mentioned the importance of sharing research outward to patients and carers, particularly when it comes to ocular disease.

“For a large part of the world, people don’t even know you can treat cataracts. So how we communicate this science and research outward to the public is very important. It can change the world.”

On Saturday, March 26, the ORBITAL ESRs came together with approximately 50 members of the sight-loss community, with over 40% of attendees being patients, clinicians, or carers. The opening session was chaired by the Secretary of State for the Inclusion of People with Disabilities, Dr. Ana Sofia Antunes, and the President of Instituto Superior Técnico, professor Rogério Colaço.

The purpose of the event, held in the World Cafe format, was to encourage open and honest conversations amongst the various people working with and living with sight-loss.  The structured and guided conversations allowed participants to address questions like “Who is a part of the vision impairment and sight-loss community, and who else do we need to bring in to create effective representation of the needs of this community?” The participants were challenged to talk in small groups and share experiences, which gave patients the opportunity to learn more about the efforts that are being made to develop new, safer and more effective forms of treatment, while also discussing the parts of vision impairment or sightloss that impact them most.

The panel of participants also included members of the European VitreoRetinal Society, representatives from OcuDel, a spinout company in Ireland focused on Dry Eye, and health care providers representing various healthcare institutions. “Edol and Pfizer Algeria accepted our invitation to participate in the event”, says professor Ana Paula Serro. “We wanted to hear from everyone involved to decide the best course of action”, she added.

At the end of the workshop, a participant and ACAPO Director Rodrigo Santos gives his closing thoughts:

“Actually we believe that disability, as a concept, is not a problem of me, or people with disabilities, it’s a problem of society. It has not created a sufficient system, with tools, and conditions, for all of us to enjoy and participate, to live. That’s something I urge us all to consider. We are talking about persons, with dreams, hopes, desires, and also fear, and also with anxiety, and burdens.

It’s most important we remember the whole person. It will take all of us together, those with blindness and sight loss, and those without, to consider who is responsible to make this world more welcome to us all.”

The ORBITAL ITN is now working with a graphic recorder to create both a visual and audio representation of the workshop, to demonstrate how its outputs can be used to bridge the space between pre-clinical researchers and the public they serve. Next steps are already underway at Técnico, where Professor Serro is creating plans to host a Portuguese language event on Diabetic Eye Disease, in similar fashion.